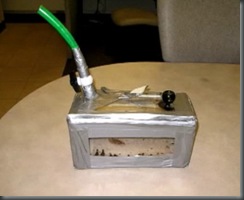 OMAHA, Neb. – A man who stuffed his girlfriend’s cat into a makeshift bong and smoked marijuana through it said Tuesday that he had done it on other occasions and that it calmed the cat down.

Lancaster County sheriff’s deputies responding to a domestic disturbance at the residence ticketed the 20-year-old Schomaker on suspicion of misdemeanor animal cruelty Sunday after catching him smoking marijuana from a boxlike contraption that had the cat stuffed inside its 12-inch by 6-inch base.

Vieux, 22, said she took in the cat about two months ago from friends who abused it.

â€˜I’m just the first one to get caughtâ€™
So Schomaker said he decided to use the makeshift bong because he had heard about people calming their pets by blowing marijuana smoke in their faces.

"I know for sure this isn’t the first time someone has done this," he said. "I’m just the first one to get caught."

He said he put the cat in the bong a total of three times and it seemed to calm the cat.

The bong had a foot-long piece of garden hose coming out of a Plexiglas box, with the top secured with duct tape. Schomaker said it was constructed in such a way that the cat did not get immersed in smoke to the extent some might believe.

Schomaker said law enforcement and animal specialists lectured him about why what he did was cruel, and that he learned from his mistake.