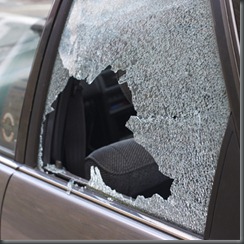 Car burglaries are off the hook. Not a day goes by where we don’t get at least 5-6 calls of car burglaries being reported. Shouldn’t be a surprise though, what easier way is there to get free stuff to sell or trade for drugs? After most responsible people with jobs have eaten dinner, watched the evening news and dozed off to sleep, the scum of society comes out of the woodwork, just like roaches. They walk or cruise through neighborhoods looking for free stuff, stuff you left out for them. They look into cars to see what’s there; maybe a laptop, a nice phone, a briefcase, a nice stereo that someone didn’t take the faceplate off, a purse, wallet, backpack, anything that might have value. They try door handles because a lot of people make it easy for them by leaving cars unlocked.

My daughter used to leave a book bag in her car telling me it was a hassle to bring it in each night and that nothing of value was inside except books. I’d tell her that she might know nothing of value was inside but thieves don’t know that. To a thief, a book bag or backpack might contain a laptop or something of value so they break in to "check". If a thief looks inside your car and sees nothing, they move on. A thief usually doesn’t waste time breaking into a car just to "look" for something, they break into cars to grab what they see. If a car is unlocked they may rummage through an ashtray looking for loose change or car keys.

While most car burglaries occur during the night (less traffic, most people asleep, less potential for witnesses, thieves able to see approaching headlights etc.), there are some bold thieves that target shopping centers during the day. Where else can you find hundreds of cars all parked together with many containing laptops, purses, wallets and more? These thieves walk through rows of cars looking inside all the cars. If they see something, they grab it. If the car is locked they break a window. If they see nothing they keep walking until they see something in another car. Again, they don’t waste time breaking into a car "just to see" if something might be inside, they target cars where they know something is inside.

What prompted me to write about this topic again is that I went outside this morning to get into my truck to go to work. The windows were frosted over from the cold but I saw the "telltale" sign that the "roaches" were out that night. My drivers window had a clear "wipe" mark on it where someone had wiped the frost off and looked inside to see if anything was visible. Luckily I keep nothing in view so they moved on to other cars in the neighborhood. If I had left something of value in the car I would have found broken glass on the ground and my stuff missing. I’m sure if I took the time to circle my block I would have found cars broken into.

So take the precautions;

Lock your doors and most importantly, don’t leave ANYTHING in view in your car. If a thief looks inside your car make sure they don’t see anything and they’ll just keep walking on to the next car.

Motion lights over your driveway are GREAT! Thieves don’t like light, get a million watt bulb to light up the roaches when they approach your driveway and most of the time they’ll keep walking.

Car alarms, if you have one use it! A thief isn’t going to take the time to rummage through a car if a blaring alarm is going off drawing attention.

But keep in mind, even with lights or alarms, if something is in view they’ll smash a window and grab it, it only takes a second. The best protection is to not leave anything of value in your car.

So take precautions and keep your stuff safe. With the economy the way it is, burglaries and thefts are skyrocketing. If you leave stuff in your car it’s not a matter of "if" your car is broken into, it’s a matter of "when".