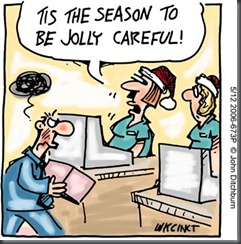 The Holiday season is upon us. And so are the scamming cold- hearted criminals who prey upon others. And this time of year itâ€™s a little easier for them because people make it easy for them. Here are a few examples of incidents Iâ€™ve already started seeing occur:

I donâ€™t know about you, but I think this would make most people walk away quickly thinking scam. But, greed makes people victims all the time and this case was no different. The victim walks to the suspectâ€™s vehicle and sees a sealed 52â€ TV box in the back of the suspectâ€™s car. He quickly hands the suspect $500 cash and the suspect starts to get in his car. He tries to stop the suspect and the suspect pulls a gun and robs the victim for his wallet, cell phone and keys. The suspect drives off to go pull the scam again at another Best Buy store.

Greedâ€¦â€¦it will make you a victim. Remember the phrase â€œif it seems too good to be true then it probably isnâ€™t trueâ€. Guy thinks heâ€™s going to get one over on Best Buy and get a new TV for more than Â½ off but ends up getting robbed. Then he wastes our time calling us to help him. If he hadnâ€™t been greedy and tried to commit an illegal act himself in the first place, he wouldnâ€™t have gotten robbed. I think all calls involving greed and stupidity should be cleared as lesson learned.

** A woman goes Christmas shopping at several stores in a mall. After buying gifts at each store she puts the bags and packages in the car before going on to the next store. Pretty soon the car is stacked with goodies. A passing thief spots the bounty and breaks a window. The thief grabs several bags and items and also the womanâ€™s purse which was left in the car (she didnâ€™t want to get her purse snatched so she left it in the car on the seat). Woman returns to her car and everything is gone.

This time of year thieves LOOK for this kind opportunity. It really is like Christmas for them because they get so many free things during the holiday season. Go to any mall or major outlet store parking lot and just park and watch. Youâ€™ll see people â€œcasingâ€ the parking lot. Thieves walk, ride bikes, and the ones lucky enough to have a car or steal one cruise the parking lots looking for victims; women with purses hanging loose and not paying attention, cars stacked full of packages and gifts, purses, briefcases, laptops laying on car seats, greedy people who make easy targets for scams, etc etc.

Then thereâ€™s the scammers who bring their young children to the parking lots and scam money out of people stating they are poor and they need money to buy their child clothes and a toy for Christmas. This is the time of year most people are in the holiday spirit and vulnerable to these scammers. People feel sorry for them, hand them $5 or so and feel they did something nice for a poor person at Christmas. In reality all they did was buy some heroin, methamphetamine or a couple of 40 oz bottles of beer for a habitual loser who just scammed them.

I may sound cynical, in fact I know I sound I sound cynical, but you have to remember Iâ€™ve been a cop for over 20 years and see this all the time. Are there truly needy people and families out there? Absolutely! But itâ€™s usually not the ones hanging out in parking lots or on street medians begging for beer money.

If you want a feel good feeling that you helped someone at Christmas, donate items to a Goodwill or Salvation Army type of organization. Give extra jackets or food items to a shelter or holiday collection drive. Volunteer at a homeless shelter or food kitchen over the holidays where you know your help is going towards a good cause.

Have a Merry Christmas and a Safe and Happy New Years. Donâ€™t let thieves or scammers ruin your holidays.

And hopefully we will be back soon with our Podcasts. Unfortunately much of our time is now being spent dealing with a terminal illness in our family.